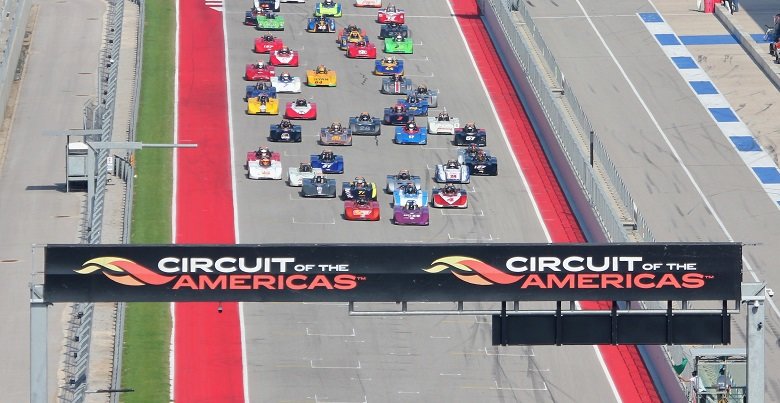 A stream of SRF3 cars charged up into COTA’s Turn 1 Sunday morning.   Grayson Strathman took an early lead, but a full-course yellow came out to bunch the field back together.  On the restart, Saturday SRF3 winner Cliff White jumped to the front followed closely by Strathman and Tray Ayres.  Then for the next 10 laps, White and Strathman swapped the lead back and forth from corner to corner, lap to lap.  That standard remained true all the way through the final lap.  But when the battle was over, White in his No. 58 The Cottages/Valvoline/DN Motorsports SCCA Enterprises SRF3 managed back-to-back wins over two days of racing.

“This racetrack is awesome.  It’s so wide that you can go side-by-side almost anywhere,” White said about the 20-turn, 3.41-mile circuit. “For the last five or six laps, I’m guessing we had two passes each lap for the lead.  It was fantastic.”

But it wasn’t only the Spec Racer Ford drivers who put on a magnificent show for spectators.  In the Touring 1 class, Marc Hoover jumped out to an early lead and was pounding out great laps.  However, his car again experienced some issue as it did two weeks ago at the Willow Springs Hoosier Super Tour event in Southern California. Joseph Gaudette, in his No. 86 Over1G-Racing/G-Loc Brakes/Phoenix Chevrolet Corvette Z06, was able to close on Hoover midway through the race and took the top position.  Hoover refused to give up and hounded Gaudette’s car the rest of the race, but Gaudette held on for back-to-back T1 wins at COTA.

“Today was certainly not the ‘walk’ I had Saturday for the win,” Gaudette said.  “Hoover checked out with the lead at the start of the race and walked away.  I was waiting for my tires to come in a little bit because I went out on older Hoosiers, but they came right in about halfway through the race.  It was tough to pass Hoover, and he pressured me after I got by.  He’s got a stronger car through the high-speed stuff, and I got a stronger car through the low-speed sections.  It was a heck of a race.”

The GT-2 battle Sunday was equally enthralling.  Saturday winner John Vining had the lead, but Mark Sherrin was right with him most of the event.  Coming into Turn 1 on the last lap, Sherrin made a move to the inside, but his car spun and Vining scampered away for the win in his No. 15 Hoosier/Smielys/HVT/Brakeman/PSC/TPIS/Koolmat/Teamtech/Eibach/Taylor Race Engineering/Gspeed Chevrolet Monte Carlo.

“The race was tight the whole time,” a grinning Vining said afterwards.  “Marc (Sherrin) definitely kept it close, but I was able to force him into a mistake the last lap and we got the win.”

The open-cockpit, open-wheel Formula F class put a perfect cap on the Hoosier Super Tour’s visit to COTA, the first such visit from an SCCA premier amateur road racing series in four years. David Livingston, Saturday’s FF winner, grabbed the lead quick. But a full-course yellow brought the field back together again after only a few laps.  When racing resumed, Livingston found himself being chased by Joe Colasacco and Gord Ross.  For the remainder of the race, the three ran nose-to-tail, taking turns at the front of the pack.  On the very last lap, Livingston dove inside Ross going into Turn 1 for the lead.  However, by the end of the lap, it was Colasacco in his No. 2 Rive Bistro/Auriana Racing Van Dieman FF who claimed victory.

“I was basically just biding my time most of the race.  I just could not get in front of David (Livingston) and Gord (Ross),” Colasacco said.  “I sat back in third and on the last lap they made contact going through the esses.  It was unfortunate it ended that way. But it was tight, clean racing and I’m glad to have come out on top today.”

Sunday racing at Circuit of the Americas wrapped up the fourth of 11 Hoosier Racing Tire SCCA Super Tour events planned this year.  Next on the schedule is an April 8-9 stop at Hallett Motor Racing Circuit in Jennings, Oklahoma.  Follow all the action live at www.scca.com/live.

Photo: The Spec Racer Ford Gen3 field takes the green flag Sunday during the Hoosier Super Tour stop at Circuit of the Americas.