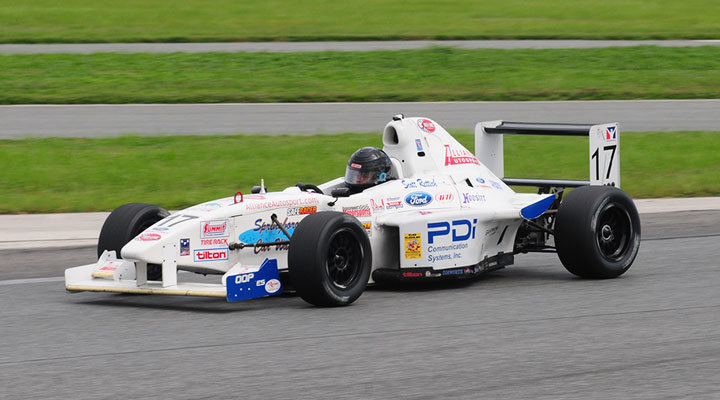 Scott Rettich, of Columbus, Ohio, has been a force in Formula Enterprises as he scored his third consecutive National Championship in the class at the SCCA Runoffs Presented by Garmin VIRB at Daytona International Speedway. Ryan Norman, of Aurora, Ohio, and Paul Schneider, of Mint Hill, North Carolina, completed the podium, in that order.

Rettich, in the No. 17 Alliance Autosport/Pdiarm.com FE, added to his collection of National Championships and Super Sweep awards. He now has five of each to add to his other career statistics. In addition, this is both his third consecutive national title and Super Sweep in the class.

Rettich ran unchallenged for much of the 14-lap race around the 3.56-mile, 12-turn road/oval course. The only time that Rettich’s hold on the top spot was challenged came during the opening two laps. Rettich was hounded by multiple drivers on the approach for Turn One for the first time. Once through the infield portion of the track, Reece Everard, in the No. 48 V2 Motorsports/RE Motorsports FE, was the only driver that was able to get himself into the slipstream created by Rettich. However, Everard was forced to pull into the pits on lap seven with mechanical problems.

“This means a lot to me,” Rettich said. “Each of these five National Championships are very special to me. Also, tying Jerry Hansen’s record of seven consecutive poles really means a lot. In 10 years, someone probably won’t remember who won in 2015, but they will see that stat in the record books. It’s just been an awesome experience.

“We have a great setup and my team, Alliance Autosport, works extremely hard. No one works more on an FE during a race weekend than Al Hostettler. My team, the driving and my process all come together, it’s not just one thing. My two concerns coming into this race were whether or not it was going to rain and surviving the start. I love to race in the rain, but you would rather not do that with a car that is so fast in the dry. Obviously, the start was going to be critical because I knew my competitors were going to be right there trying to get around me. Regardless of the position, I just wanted to make sure I got through the start and that it was pointed forward.”

Further back in the field, the story of the race became attrition. Following the retirement of Everard, it became all about holding onto position. Norman, in the No. 48 Comprent Motorsports FE, had issues as did many of the other drivers looking to challenge Rettich. Following the green flag Norman did not have the start he would have liked, but considered himself lucky when he saw Everard pull down pit road.

“I had a terrible start,” Norman said. “I fell back to third place as Reece [Everard] got ahead of us. He came out of nowhere. Something happened to his car, causing him to have to go down pit road. That was when I was able to take over second place.

“I was fighting the entire race to find grip. I was adjusting my swaybar back and forth to get things working better. Scott [Rettich] was just in a different zip code. Trying to keep the guys behind me, and staying in second place was a challenge. In the latter parts of the race I knew the win was not possible.”

Schneider, in the No. 73 Syvel Images/JBD Customz FE, did a lot of work to finish third. Starting from fourth, Schneider got embroiled in the opening-lap hustle for position that occurred in Turn One. As the race wore on Schneider was in an intense battle with Norman for the third position, before Everard was forced to pit lane.

“I started fourth, then I got shuffled back to sixth or seventh after the start,” Schneider said. “Somehow Reece [Everard] went from behind me to second. I’m not sure how that happened. On that lap I was able to pick off two drivers through the bus stop, ending up in third. I worked my way back up to fourth and then battled with Brandon Aleckson for a bit. We proved you can bump draft with FE cars, in my battle with him.

“Toward the end of the race while I was racing with Aleckson for third Kennedy spun in the bus stop. After seeing that I decided to take it easy and settle for third; otherwise the same thing may happen to me.”

Completing the closely-fought top five were Brandon Kennedy in the No. 14 Osinga Construction/Hage Tool FE, and Thomas Green in the No. 68 Radiology Associates FE, in that order.

Taking the Sunoco Hard Charger award was Ray Mason, in the No. 25 Alliance Autosport FE, finishing 10th from his 14th-place grid position.

While the live broadcast of all 27 National Championship were available live at SCCA.com, each race will be on demand in the coming weeks.