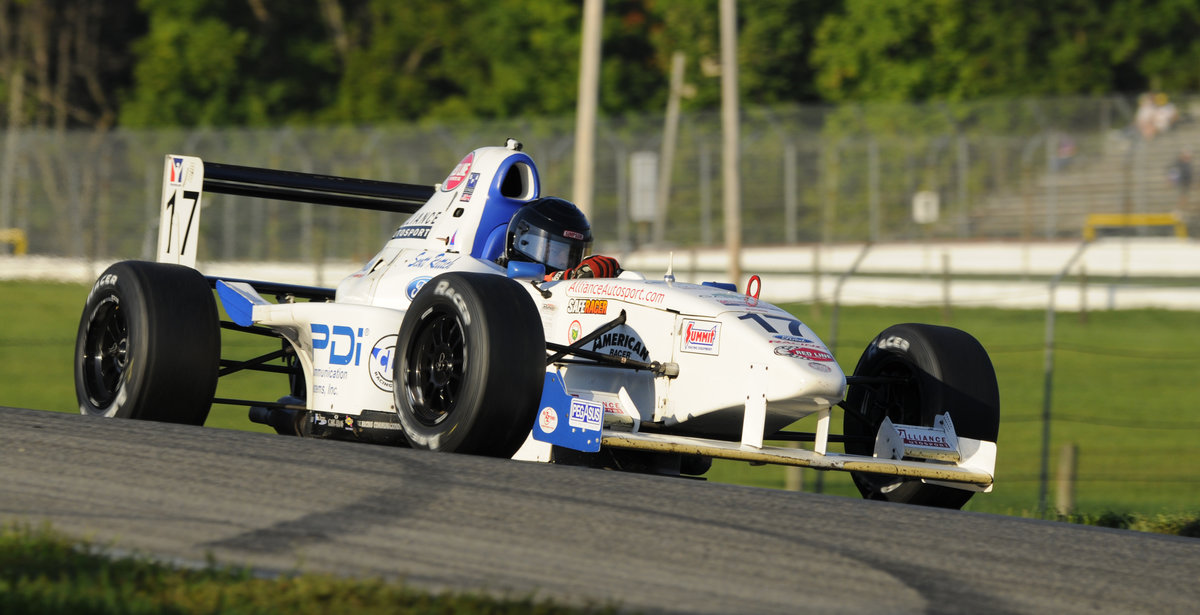 Scott Rettich, of Columbus, Ohio, had a great week at Mid-Ohio Sports Car Course in his No. 17 Alliance Autosport/pdiarm Formula Enterprises/Ford during the 53rd SCCA National Championship Runoffs presented by Garmin VIRB. He was dominant all week and walked away with his sixth Runoffs championship in the class. Hanna Zellers, of Granger, Indiana, finished second with Paul Schneider, of Mint Hill, North Carolina, finished third.

“We knew how difficult and slick the track would be in the morning,” Rettich said. “I knew I had to build a gap early. So I just stood on it for the first third of the race. I built a comfortable gap, pushed fairly hard in the second-third of the race, then saw I had a 25-second gap. Then I just backed it down to a comfortable pace.”

The nine-car field started the 23-lap race with Rettich at the front after a dominant performance in qualifying. He was at the top all four days and changed the SCCA record book by earning his eighth-straight FE Tire Rack Pole, a Runoffs consecutive fast qualifier record. But Schneider in the No. 73 Syvel Images/Performance MotorCars Formula Enterprises/Ford, who is recovering from appendicitis, managed to take the lead at the exit of Turn 1 by going around the outside of Rettich.

That lead was short lived as Rettich soon reacquired the top spot and ran away for what was ultimately a victory of 23.154 seconds, earning his sixth SCCA Super Sweep awarded to drivers that win a U.S. Majors Tour Conference Championship, win one of nine key National races, win a National Championship at the Runoffs and win the national points standings — all in a single class.

Early in the race, Schneider found himself fighting with the No. 27 car of Dean Oppermann from Plainfield, Illinois. The two switched positions several times, which gave Zellers in the No. 33 HZ Motorsports/One machine an opportunity to close while conserving her tires. Schneider solidified his hold on second while Oppermann fell back, soon to be overtaken by Zellers who ultimately closed down on Schneider and made the pass for second on lap 17 going into the Esses.

“The two in front of me were very close together, so I was a little worried,” Zeller said after turning the fastest race lap on way to her first Runoffs podium. “I was afraid someone ahead would lose a wing or something. Otherwise, I was just being patient and waiting for my car to come in.”

For Schneider, this is his second-consecutive third-place Runoffs finish in the class.

“Oppermann drove me hard,” Schneider said after the race. “I used up the tires too much trying to get around him. It let Hanna get into the picture. She caught and motored past me because I’d already used up the car at that point.”

Justin Huffman, of Herndon, Virginia, finished fourth in his No. 11 Jamison car, and Oppermann brought it home in fifth. Huffman also earned the Sunoco Hard Charger, moving from sixth on the grid to fourth. Opperman completed the top five.

While the live broadcast of all 28 National Championships is available live at SCCA.com, each race will be on demand in the coming weeks.