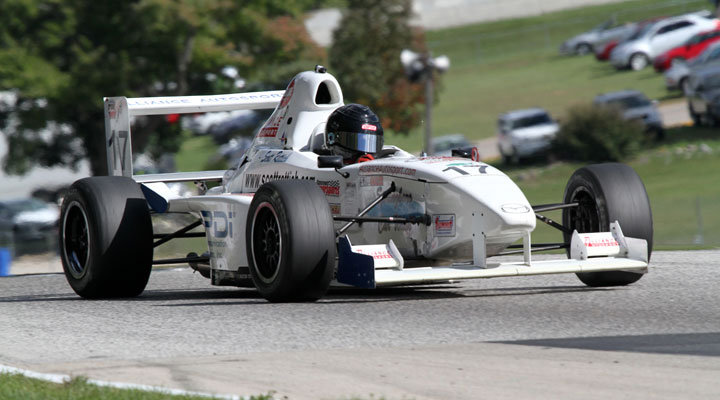 Rettich started from the SafeRacer pole position in the No. 17 Alliance Autosport/PDI Communications SCCA Formula Enterprises. The only part of the race Rettich did not lead was the first four corners of the race. Rettich passed then-leader Paul Schneider, of Mint Hill, N.C., in turn five to retake the lead and opened up a gap.

On lap two, Rettich’s lead was erased by the race’s only caution. The yellow came out after Tilden Kinlaw, of Lumberton, N.C., and Matthew Cutter, Sterling, Ill., made contact in turn six. Both cars spun, sustained damage and did not finish.

The race went green again on lap four. On the restart, Rettich got a great jump and never looked back. He drove a dominant race, winning by 47.021 seconds. Additionally, he turned the Hawk Performance Hot Lap of the Race with a 2:14.220 (107.287 mph) en route to winning his third-career Formula Enterprises National crown. He turned his fast lap on the penultimate lap of the 13-lap race – demonstrating he was not slowing down.

“I knew I had the car to beat,” Rettich said. “We had a great setup. I gave myself a pretty good start. Schneider was pretty aggressive, but fair. He got to the outside of me and I let him go because I knew I could get back around him. I passed him going into turn five on the first lap. He broke deep and got to the inside of me. We went two-wide at the entry and I came out ahead.

“Then, I put my head down and started pulling away. I didn’t like to see the full course caution. But, I got a good solid restart – made no mistakes. I started opening a gap again. I was a little nervous with three laps to go when I saw a couple competitors off, so I was hoping there wasn’t going to be a full-course caution. Luckily there wasn’t and I went on to the win.”

Rettich was the third driver of the 50th Runoffs to win the prestigious Club Racing Super Sweep. The Super Sweep is the most difficult on-track award for a driver to claim, as it requires a U.S. Majors Tour Conference Championship, a win in a key, designated Majors race, the nationwide point championship, and a National Championship at the Runoffs, all in the same class.

Rettich has been a Super Sweep winner in each of his three Championship seasons.

“Winning the 50th Runoffs, winning the Super Sweep, and the Triple Crown, just feels incredible,” Rettich said. “Certainly, it is a great accomplishment. A lot of dedication and time goes into winning this.”

Everard started 10th in the No. 3 HGS Automotive SCCA Formula Enterprises. Through solid driving, and some attrition, he was third heading into the final lap. At that point, Everard was right behind Kennedy in the No. 14 Osinga Construction Inc Hage Tool & Machine SCCA Formula Enterprises. Everard passed Kennedy in turn one for second place, and Kennedy returned the favor in turn five. But, the two weren’t done swapping spots. Everard saw an opportunity to pass Kennedy in Canada Corner and he took it. Everard held on for second – his first-career Runoffs podium finish.

“Those last few laps, I saw Brandon ahead of me,” Everard said. “I knew I just had to put my head down and try as hard as I could, and I finally caught up with him.

“That last lap, I knew I had to do something. I passed him in turn one, but I knew that wasn’t going to be the last of it. I knew he would be coming back. I knew in turn five he would get alongside me. In Canada Corner, I had an edge on him, so I figured I would wait until then, and it paid off. It was a good finish.”

The turn 12, last-lap pass earned Everard the GoPro Hero Move of the Race. He was also the Sunoco Hard Charger after improving eight positions. He started 10th and finished second.

Kennedy started sixth and was up to fourth after one lap. By lap eight, Kennedy’s No. 14 machine was in second. At that point, Kennedy was reeled in by Everard over final five laps. That’s when Kennedy and Everard traded spots three times before Kennedy had to settle for the final podium spot. Kennedy’s third place finish was his first-career Runoffs podium.

“It was a great battle,” Kennedy said of his race with Everard. “I could see him gaining on me in my mirror for six, eight laps. I wanted to hold second. But, Reece is a tough competitor. He got me going into [turn] one, I got him back going into [turn] five. I was sliding the car, doing everything I could to keep him behind me. He got me in Canada [Corner], and I couldn’t get him back.

“If I had some more experience, there might have been some tricks up my sleeve, but I did everything I was told to try to do. He just managed to do more than I did.”

The live broadcast of all 28 National Championship races will be available through Sunday at www.SpeedcastTV.com/scca and later available On Demand from the same site.