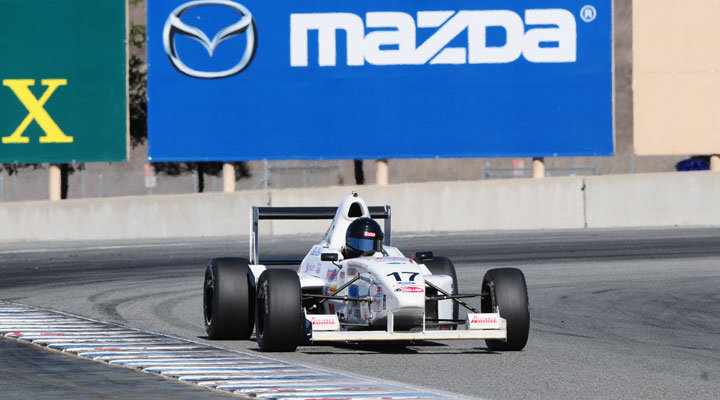 Rettich, the Tire Rack Pole winner and three-time FE Champion, was the favorite to win Saturday’s FE race. The driver of the No. 17 Alliance Autosport/PDI Comms Systems SCCA Formula Enterprises/Ford didn’t disappoint the oddsmakers, leading the 20-lap race from start to finish.

“I was certainly feeling the pressure,” Rettich said. “I knew there was a lot of strong locals. I didn’t get an opportunity to make the long trek out here and do any test days in advance, so I knew I’d have to make the most of the limited seat time to get the car setup. Luckily, all the sessions went pretty well, so we were able to go into the race with a good setup and I got my line all dialed in and everything.”

Rettich led the 11-car FE field to the green flag and through Turn One without issue. By lap four, he had already built a 4.455-second lead to second-place. That gap held around four seconds until a late-race full-course caution was issued for a Formula Mazda car stuck off course in Turn Two. The FM class was run in conjunction with FE.

“I certainly had some pressure from behind and I had to do my best to get through traffic without taking any unnecessary risks,” recalled Rettich. “I was certainly being held up in traffic. Everyone was being fair, but they weren’t pointing me by.”

Luckily for Rettich, several FM cars served as buffers between him and second-place Everard on the lap 18 restart. It may not have mattered either way, however, as Rettich again pulled away from the pack, crossing the finish line with a 2.863-second lead.

The win not only earned Rettich his fourth FE crown, but also his fourth SCCA Club Racing Super Sweep, awarded to drivers who win a Majors Conference Championship, one of 10 key Majors races, win the National point standings and the Runoffs in a single class.

Though he dropped a position on the start, it didn’t take long for Shute to have his No. 49 RobinShuteRacing.com/Bulldog Motorsport Formula Enterprises back in the hunt.

“Starting from second is worse than third for sure,” Shute said. “I knew Brandon [Aleckson] was going to be a bit of a hero going into Turn Two, that was a bit expected. I waited for that to happen, but Reece was also right behind him and did a really good job. But I knew the race was long and I was confident I had the legs on him.

“I accepted my fate, kept it clean, didn’t hit anyone, let it happen and tried to get by Reece. He was running really well. I kind of had to get my brain in gear and do my best to overtake him. He was weak going into Turn Five. My first go I out-braked him into it, but he did a real good job of railing around the outside. We had a really good battle. He gave me just enough room; nothing more, nothing less, as he should. Then about two laps later I tried it again and was slightly better mid-corner and could pull alongside him and we had a cute drag race up Six.”

Shute was into second, scoring the Go Pro Hero Move of the Race Award in the process, but Rettich appeared long gone. A late-race yellow might have provided the rookie with a chance to challenge Rettich for the lead, but FM traffic between the two prevented such an opportunity. Instead, Shute needed to focus on keeping Everard behind him in the final two laps, which he did by 0.394-second at the line.

Everard, in the No. 61 SCCA Formula Enterprises, had a great start, moving from fourth to second, but was immediately under pressure from Shute. On lap three, Shute was around for second and although Everard was able to hang with him, FM traffic eventually widened the gap between the two.

“I managed to get ahead of him (Shute) at the start,” Everard said. “He made a couple attempts to pass me going into Turn Five and Six. I managed to hold him off for a couple laps, but eventually I couldn’t hang on anymore and he managed to get past me. Coming into lapped traffic is when we started to fall back and it was just about catching up after that.”

The late yellow looked like it might give Everard the chance he need to get back around Shute, but FM traffic hindered Everard’s chances and he crossed the line behind Shute in third.

“It was close,” recalled Everard. “It was hard with the Mazdas between us on the restart. I knew I’d have to make a pretty bold move to get around them all going into Turn Two. I managed to, but we all kept our gaps and were running consistent times. It was just a drag race from there.”
John Yeatman, of Newcastle, Calif., finished fourth. Justin Huffman, of Herndon, Va., completed the top five.

Keith McDonald, of Ranson, W. Va., was awarded the Sunoco Hard Charger Award for advancing three positions during the 20-lap race, from 11th on the grid to eighth at the finish.

The live broadcast of all 27 National Championship races is available live at SCCA.com, along with live timing and notes. Each race will be on demand at a later date on SpeedcastTV.com.