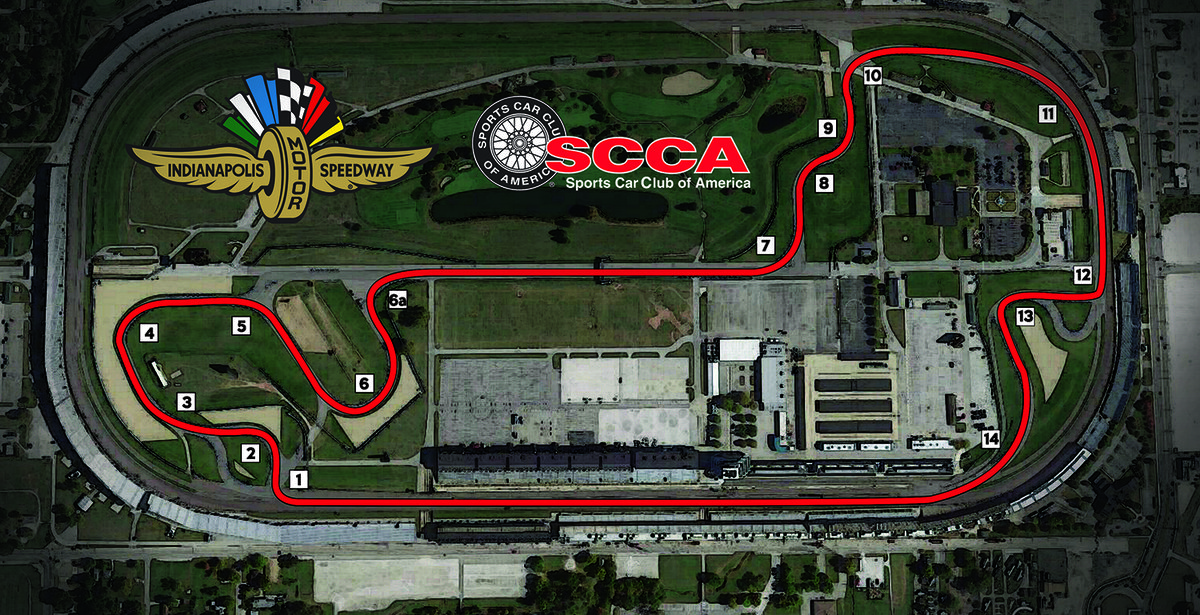 On a mostly rainy Tuesday back in August of 2016, the Sports Car Club of America hosted a half-dozen Club racers at Indianapolis Motor Speedway to test multiple road course layouts for the 2017 National Championship Runoffs to be held in September. After a full day exploring seven different configurations, both clockwise and counterclockwise, the SCCA Club Racing Department has reached a decision.

The 2017 Runoffs course at Indianapolis Motor Speedway will be an exciting 15-turn challenge running 2.592 miles in a clockwise direction. The layout, which can hold up to 72 cars per Runoffs race, consists of ten right-hand and five left-hand turns, as well as a main straight 3,700 feet in length. The racing surface is 45-feet wide in sections with very mild, FIM-approved curbing. Eric Prill, SCCA Vice President and COO, said the Runoffs configuration includes portions of the track previously utilized by Formula One for the U.S. Grand Prix and currently used by the Verizon IndyCar Series for the Grand Prix of Indianapolis.

“The course we selected has a mix of straights, transition corners and long corners. It’s got a little bit of everything. I think it will reward well-rounded drivers and well-rounded vehicles, which is what you want in a championship course,” Prill said. “We have a unique opportunity in 2017 to race at a track where very few will have previous experience. With that in mind, the Speedway’s staff has agreed to make this a Runoffs-only configuration. No other racing organization will use this layout at any point during 2017, which means a level playing field when Runoffs participants arrive in September.”

The six drivers who took part in the test session included Formula 500’s Jeremy Morales, Formula Vee stalwart Lisa Noble, two-time Formula Continental national champion John LaRue, two-time F Production national champion Kevin Ruck, multi-time Runoffs winner Scott Rettich in a Spec Racer Ford Gen3, and two-time Runoffs winner Jason Knuteson in a Spec Miata. A GT-1 car was scheduled to participate, but was withdrawn after sustaining damage in a race two days prior to the test. Prill said each of these invitees agreed to pay their own expenses to partake in the test, with rubber supplied by Hoosier Race Tire.

“All of the participants are very experienced,” Prill noted. “Many of them are national champions or Runoffs frontrunners. They were chosen due to their experience, as well as their proximity to Indianapolis and the type of racecar they drive. We got a lot of great feedback from each of them, as well as a good cross-section of feedback based on car type.”

A Runoffs lap will begin at the “Yard of Bricks” and head north toward a sharp right-hand Turn 1, which is nearly 90 degrees. Turn 2 is a left-hander followed by three flowing right-handers that lead into the long, left-hand Turn 6 loop. The right-hand Turn 6a then brings drivers on to the Hulman Straight. Rettich, who turned laps previously on the Indianapolis road course while involved in USF2000, said this complex will be tricky as drivers search for how best to maximize rolling speed for a good exit on to the straight.

“There are at least three good passing zones in the Runoffs layout, and then maybe another three or four opportunities to make passes with the track being so wide,” Rettich continued. “There’s really no one ‘section’ that isn’t important for a good lap, but the most important corner will be the final one leading on to the front stretch. That will be essential for good lap times and passing.”

At the end of Hulman Straight sits Turn 7, a left-hander with two different configuration options. After exploring both possibilities, test subjects agreed the more flowing entry was better than the 90-degree alternative utilized by IndyCar. The lap then continues through the flowing essess of Turn 8 and Turn 9 before navigating the increasing-radius Turn 10 right-hander that leads to the sweeping, right-hand bend of Turn 11 and on to the “short chute” between Turn 1 and Turn 2 of the oval track. The 90-degree, right-hand Turn 12 will then force competitors to slow before facing the left-hander that is Turn 13, where “pit in” is also located. The long, sweeping right-hand Turn 14 is the final corner that brings racers back on to the main straight and headed toward a yard of bricks, which Knuteson said will leave an indelible mark on the minds of Runoffs racers next year.

“What really hits you is when you go across the yard of bricks,” Knuteson said. “When you pull out of the pits, you are overwhelmed by the size of the stands and the facility itself. But when you hear the ‘thump, thump’ as you race over the bricks, I think that was the biggest moment for me.

“This is a ‘bucket list’ track,” Knuteson continued. “If you haven’t been going to the Runoffs for the last two or three years, now is the time to get the cars out of the garage, get them tuned up, get to the U.S. Majors or Hoosier Super Tour and get qualified. SCCA and the staff at Indianapolis Motor Speedway are putting on a top-notch event. It’s one you will not want to miss.”

While the day was mostly wet during testing, the track did dry out mid-afternoon. But no matter the condition, Knuteson said competitors will be pleased with the racing surface.

“It’s a very well-prepared track,” Knuteson said. “There’s very good grip. Even in the rain, it was really exceptional grip. In the dry it might have so much grip that you’ll have to be careful.”

On a side note, Prill did warn that “racers cannot drive through the gravel traps. The gravel traps stop cars. There is no getting out of the gravel. It’s like quicksand.”