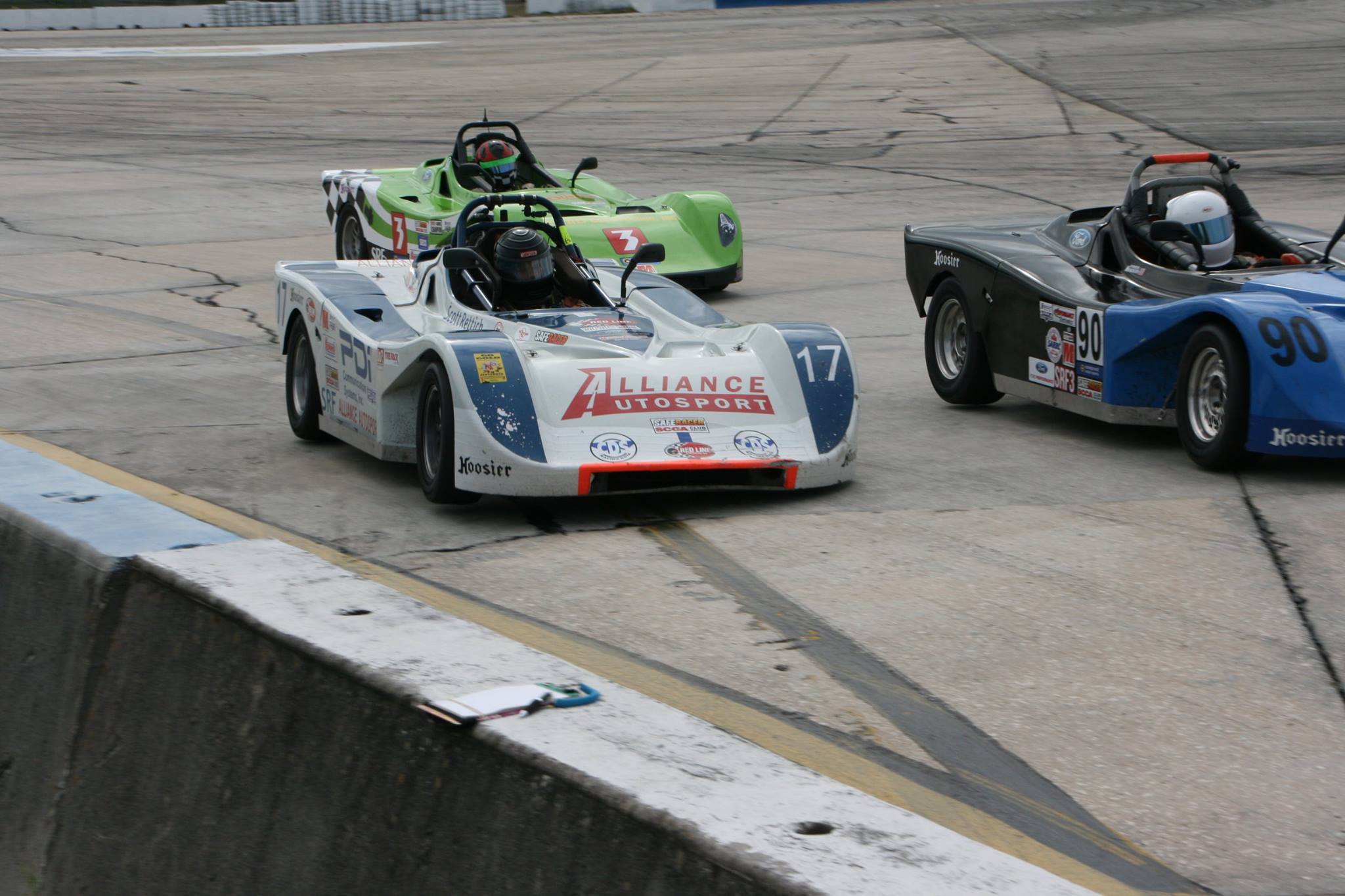 With around 400 entries for the first-ever Hoosier Racing Tire SCCA® Super Tour, there were high expectations for fantastic competition from Sebring International Raceway in Florida this weekend.  Those expectations were met at the drop of the green flag Saturday in the very first race.

The Formula F field led Group 1 to the start line and immediately began to thrill spectators watching alongside the historic 3.7-mile, 17-turn circuit.  Zach Holden held the lead at the start, but was soon overtaken by Roman DeAngelis.  A few laps later it was David Livingston who slipped into the lead.  But throughout the first half of the race, five fierce competitors battled it out upfront in the FF class.  As the race moved on, John Benson in his No.7 Advanced Borehole Services/Cricket Farm Motors/Lee Racing Swift DB3 took the lead and held on for the win.

“It’s a competitive crowd,” Benson said of the FF field.  “Really tight racing at the start.  But we found some traffic and I managed to get through it.  Then for the rest of the race I was just hammering away.”

When it comes to crowds, the Spec Miata class knows a thing or two.  For Saturday’s race, a total of 76 cars took the start.  Alex Bolanos grabbed the early lead, chased by Selin Rollan, Jim Drago, Danny Steyn and Todd Lamb.  After the contest’s halfway point, Bolanos, Drago and Lamb managed a three-car breakaway at the front.  As time ticked down, Bolanos and Drago found themselves in a side-by-side battle at points around the track.  Neither driver gave an inch right through the final corners, but Drago emerged victorious in his No. 2 East Street Racing/ Hoosier Mazda Miata.

“I started fourth, but knew I had to catch Alex quick because he’d been fast all weekend,” Drago said.  “His car started to go away a little bit before mine, and I got around him.  But he started pressuring me again.  It was a great race.  I feel like I raced against four or five of the best drivers in amateur racing.”

Not to be outdone, the Spec Racer® Ford and Spec Racer Ford Gen3 classes put 64 challengers on track for the Group 2 race.  At the end of the opening lap, the first six cars, all SRF3s, were within a second of one another.  A full-course caution midrace bunched everyone back together, but after a few laps it was Clay Russell, Tray Ayres and Brian Schofield in the hunt for a win.  The “Clay and Tray” show proved enthralling on the final lap, but it was Russell who came out ahead in his No. 31 Comprent-Angry Llama SRF3 racecar.

“I had some very fast drivers behind me and they were in my mirrors the whole time,” Russell said.  “On the last lap, I knew Ayers was faster in some areas and he was going to get by me on the front straightaway.  But coming out of the hairpin, I had a run on him and stuck my car in there and held him off.”

A second day of Hoosier Super Tour competition from Sebring International Raceway begins Sunday at 8:30am local time with 14-lap or 35-minute races.  Follow all the action live at www.scca.com/live.

Below are provisional race results from Saturday’s Hoosier Super Tour at Sebring International Raceway with Class: Name, Hometown and Car.